Paul Chambers and his "Chamber Mates" 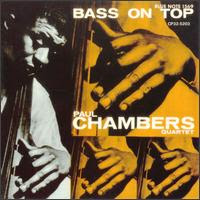 One of the top bassists of 1955-1965, Paul Chambers was among the first in jazz to take creative bowed solos (other than Slam Stewart, who hummed along with his bowing). He grew up in Detroit, where he was part of the fertile local jazz scene. After touring with Paul Quinichette, Chambers went to New York, where he played with the J.J. Johnson-Kai Winding quintet and George Wallington. He spent the bulk of his prime years (1955-1963) as a member of the Miles Davis Quintet, participating in virtually all of Davis' classic recordings of the era. When he left, "Mr. P.C." (as John Coltrane called him in one of his originals) worked with the Wynton Kelly Trio (1963-1966) and freelanced until his death. Chambers, a consistently inspired accompanist who was an excellent soloist, made many recordings during his brief period, including some with Sonny Rollins, Coltrane, Cannonball Adderley, Donald Byrd, Bud Powell, and Freddie Hubbard, in addition to a few as a leader. -Allmusic.com -Scott Yanow
Posted by LincolnLabPortland at 12:36 AM No comments:

PHOTO OF THE DAY